Posted by New Delhi Numismatics at 5:17 AM 2 comments: 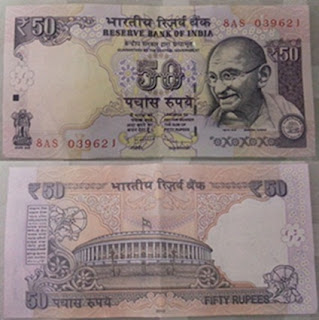 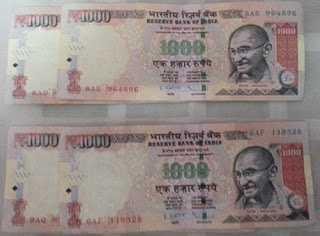 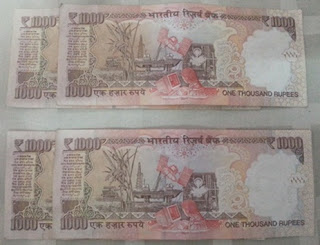 Posted by New Delhi Numismatics at 7:45 AM No comments: 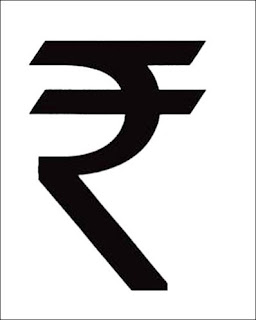 Each banknote has its amount written in 15 languages. On the obverse side, the denomination is written in English and Hindi. On the reverse of each note is a language panel that displays the denomination of the note in 15 of the 22 official languages of India. The languages are displayed in the alphabetical order. The languages included on the panel are Assamese, Bengali, Gujarati, Kannada, Kashmiri, Konkani, Malayalam, Marathi, Nepali, Oriya, Punjabi, Sanskrit, Tamil, Telugu and Urdu. 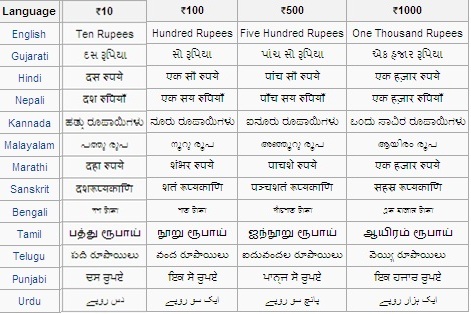 Posted by New Delhi Numismatics at 2:25 AM No comments:

Email ThisBlogThis!Share to TwitterShare to FacebookShare to Pinterest
Labels: Rupee 10 / - 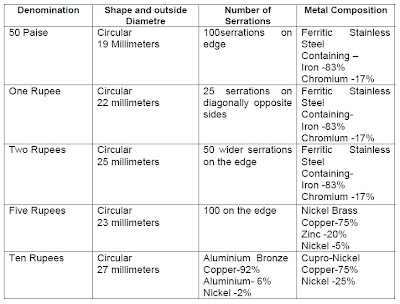 The present series of coins of 50 paise, Rs. 1, 2, and 5 contain a flowery design and for Rs.10, the number of petals have been brought down to 10 in place of the existing 15 petals. The parallel lines on the obverse side of the Rs. 10 coin have been removed and the size of Ashok Pillar has been increased.

The new series of coins have been introduced with the new rupee symbol and with features at the edge, which make it convenient for easy recognition and distinction. The design has been adopted keeping in mind the difficulties faced by visually challenged people.
Posted by New Delhi Numismatics at 5:08 PM No comments:


The Mughal Dynasty was founded by Babur in 1526 as the result of his victory over the last Lodi Sultan, Ibrahim, in the first battle of Panipat in 1526.  This victory enabled Babur to occupy Delhi and Agra.  Then in 1527 Babur defeated Rana Sanga of Mewar at the battle of Khanua and thus broke Rajput resistance.  Lastly, in 1528 Babur inflicted a second defeat on the Afghans in the battle of the Ghagra and thus extended his rule over Bihar and Bengal.  These three victories made Babur the Emperor of northern India and enabled him to found the Mughal dynasty which ruled in India from 1526 to 1858.  The dynasty composed nineteen sovereigns of whom the first six, namely Babur (1526-30), Humayun (1530-56, with a break from 1540 to 1555), Akbar (1556-1605), Jahangir (1605-27), Shah Jahan (1627-58) and Aurangzeb (1658-1707) are generally called the great Mughals.
Akbar brought the whole of north India as well as Khandesh and Berar in the Deccan under his rule.  The process of extension was continued by the next three rulers until at last in the reign of Aurangzeb the Mughal Empire came to comprise of the whole of India from the foot of the Himalayas on the north to Cape Comorin on the south.  But events soon showed that the Mughal Emperor had devoured more than he could digest.  Further, Aurangzeb deliberately gave up the policy of religious toleration on which Akbar had based his imperialism, and desired to turn India into an empire for the benefit of Islam.  This radical change in policy led to Hindu revolts initiated, first, in Maharashtra by Shivaji and then spreading among the Sikhs in the Punjab, the Jats in Bundelkhand and in Rajputana amongst the Rajputs who had been since the time of Akbar loyal supporters of the Mughal empire.  Further complications were created by the presence in India of European traders from Portugal, Holland, England, and France who had aspirations beyond trade, and who had better military equipment and organisation and completely outstripped the Mughals in naval power.  Lastly, wars of succession became a feature of Mughal dynastic rule from the end of Jahangir's reign and greatly weakened the Crown.  As a result, the last thirteen rulers of the Mughal dynasty, generally called the Later Mughal Emperors, were weak sovereigns whose dominions progressively declined throughout the eighteenth century - a process which was hastened by the invasions of Nadir Shah in 1739 and of Ahmad Shah Abdali from 1751 to 1767.
The later Mughal soveriegns were Bahadur Shah I, or Shah Alam Bahadur (1707-12), Jahandar Shah (1712-13), Farrukhsiyar (1713-19), Rafi-ud-Darjat (1719), Rafi-ud-Daulat (1719), Nikusiyar (1719), Ibrahim (1719), Muhammad Shah (1719-48), Ahmad Shah (1748-54), Alamgir II (1754-59), Shah Alam II (1759-1806), Akbar II (1806-37), and Bahadur Shah II (1837-58).
The Mughal dynasty which had been founded by Babur's victory at the first battle of Panipat in 1526 and confirmed by Akbar's victory at the second battle of Panipat in 1556, received its death blow at the third battle of Panipat in 1761 when Ahmad Shah Abdali helped by Shuja-ud-daula, the Nawab of Awadh, defeated the Mughal emperor Shah Alam II, and his Maratha allies and protectors.  Thereafter it dragged on a miserable existence not on account of any strength of its own but on account of rivalries amongst its possible successors, namely the seceding Muslim states, the rebellious Hindus, and the clever and steady English merchants, the last of whom defeated all their Muhammadan and Hindu competitors by exploiting their mutual, undying, suspicious jealousies and hostilities and succeeded in placing their soverignty in place of that of the Mughal dynasty.  The last nominal Mughal Emperor, Bahadur Shah II, who had been a virtual pensioner of the English since his accession, was formally deposed in 1858 for his alleged conspiracy in the Sepoy Mutiny and exiled to Rangoon in Burma where he died in 1862.
COINS & WEIGHTS

The research area & study of these coins of Mughal era are vast subject  that required lot of consultation from experts in this field . The above table has been prepared in consultation of fellow experts from World of Coins forum . I would like to thank expert  members for their  contribution & suggestions.
Being a challenging task and to precisely  list such data would  take  lot of time & energy.
There is further scope of improvement in above table  based on future attribution of  new coins with  unlisted weights & metal composition.
I would appreciate and welcome comments &  suggestions on above data.
Posted by New Delhi Numismatics at 7:59 PM 4 comments:


Gandhi theme is the most popular for stamp collectors  . A Unique &  special postage stamp on Mahatma Gandhi  brought out by the India Post made of the handspun cloth "Khadi" has interested stamp collectors all over.


It was released during Indipex - 2011 the World Philatelic Exhibition held at New . The khadi stamp is diamond-shaped made of khadi cloth specially manufactured in West Bengal.


has never issued any stamp of any material other than  paper .For the first time in history, India Post used Khadi cloth as material for stamp. 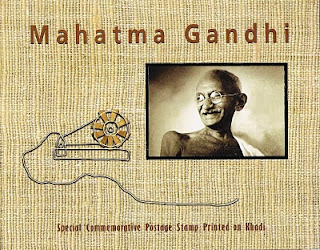 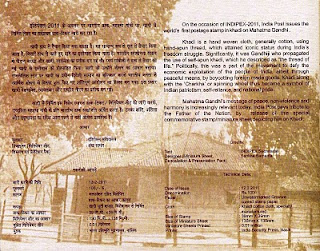 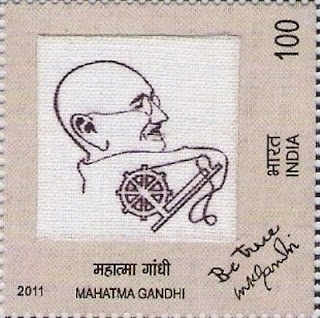 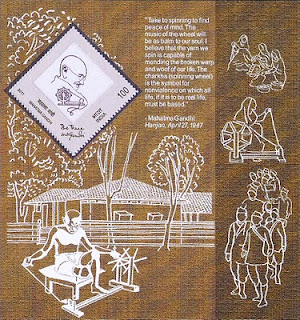 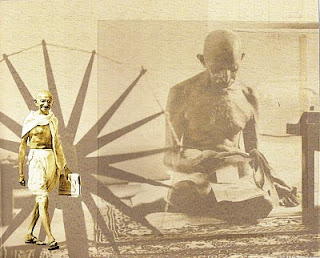 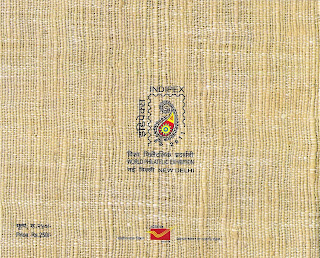 The Man Behind The Gandhi Stamp.
As the nation awaits the release of Special Khadi Stamp Of Gandhi during Indipex 2011, a man has silently added one more Gandhi design to his art Portofolio.His name is Sankha Samantha the man behind 250 stamps of .
Since 1947, the postal department has issued 33 commemorative stamps on Gandhi. Of those 33, Samanta has designed 14, making him the most sought after Gandhi stamp artist.
For a man who makes such an art of stamp design, Samanta’s career started by chance. In 1987, when he was a student at the of Art, Samanta was forced to visiting Dak Bhawan to audition as a stamp designer.
To test the soft-spoken Bengali’s skills, the Post officers asked him to draw a portrait of Indira Gandhi. They were impressed with the result, and Samanta was appointed an empanelled artist.
The first stamp he designed was of Veer Narayan Singh, a sepoy executed in 1857. Since then, Samantha said he’s designed more than 300 stamps, which include portraits of freedom fighters, politicians and industrialists.
Posted by New Delhi Numismatics at 9:37 AM No comments:

New Delhi Numismatics
Dear Friends , A very warm welome & Thanks for visiting here . Both Philately & Numismatics are interesting hobbies since centuries and these hobbies give us opportunity to study & preserve stamps & coins . We all inherit many things that give pleasure & devoting time to such hobbies are really stress burster . One of my passion since childhood has been Philately and progressively it turned into Numismatics as well.